Everything you wanted to know about the Stržen watercourse restoration

The machinery is gone, and the piles of soil, too

All works of renaturation of Stržen watercourse have been completed! This means that the original image with several meanders as created by nature before every human intervention, have been returned to the main watercourse of Cerknica Lake, Stržen, in Ključi and Beli breg areas. One hundred years ago, the locals, wanting to provide more food for more hungry mouths, instead of having water in the lake, have changed Stržen`s meanders into straight channel, to have more land to grow crops. However, this wetland area has not proven to be suitable for farming. Some private land having been divided by the straight channel has been another melioration consequence. 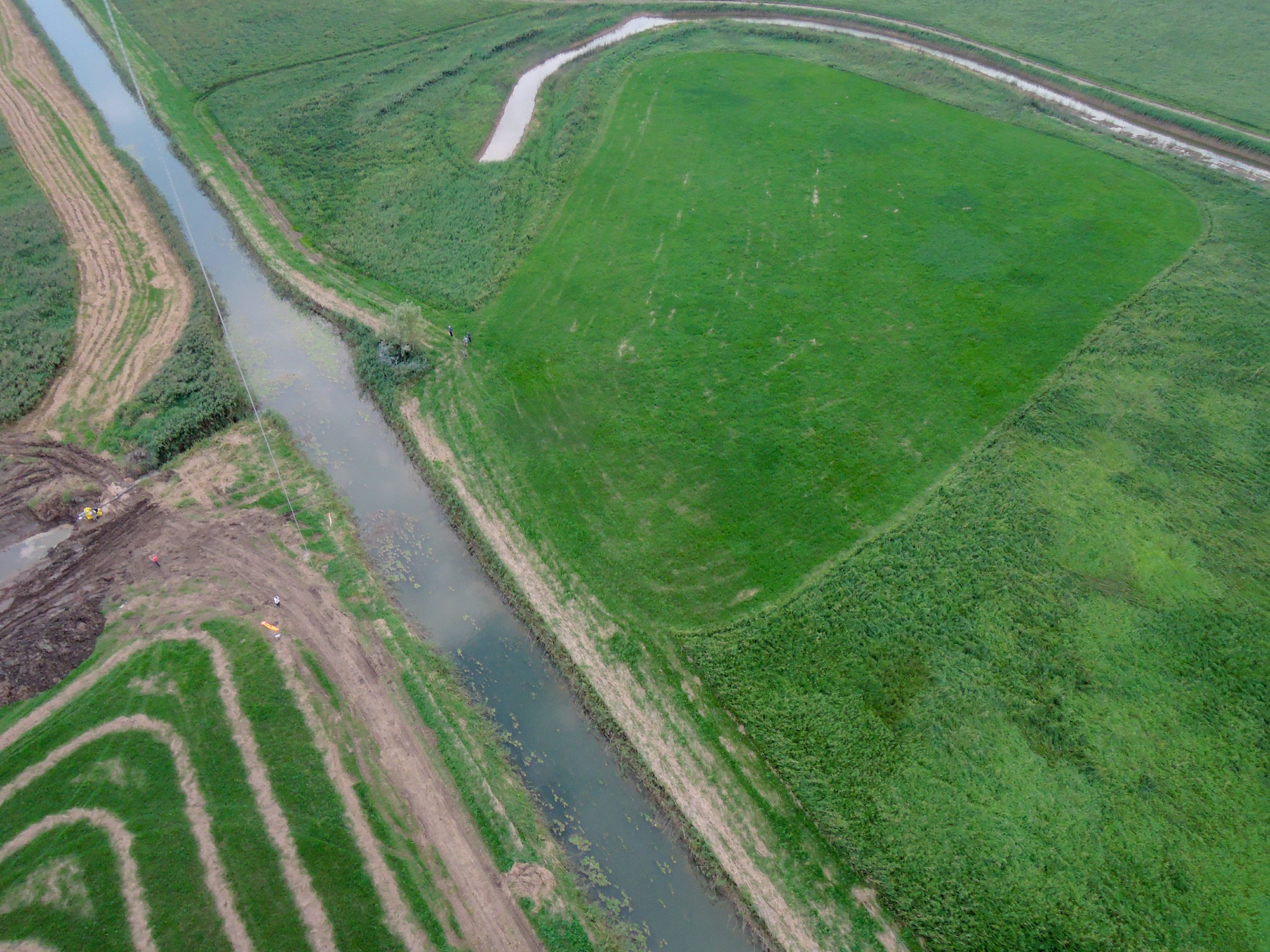 The straightened channel before our renaturation process. Photo: Miha Ivanc 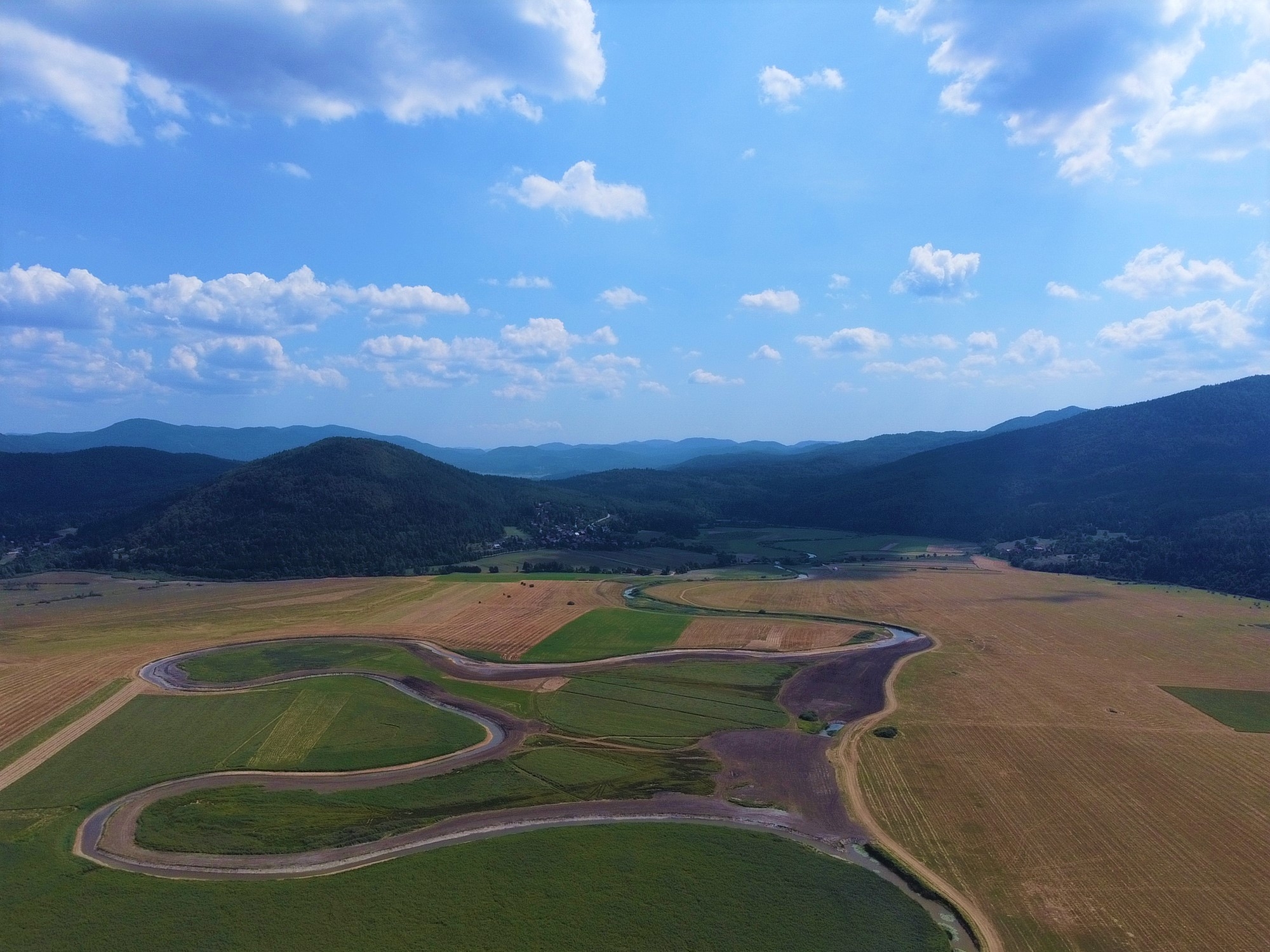 The watercourse Stržen after the restoration with its original meanders. Photo: Aleksander Vučanović

Stržen has been given back a larger volume of water and a larger space for animals and plants developement, and its four former meanders. As early as in 2019, the construction contractors carefully re-excavated the former meanders in the upper part of Stržen. This year, the Notranjska park, with the expert help of Fisheries Research Intitute of Slovenia and the local fishermen, caught the fish and crustaceans out of the straightened channel and moved them to the new meandered area. Then the construction workers pumped water out of the flat riverbed. This dead flat channel was then filled up with earth that had accumulated during the meanders excavation. With it, before the departure of  construction machinery, the now former work site was completely leveled and rehabilitated. Stržen`s water now flows again along its beautiful original meanders. 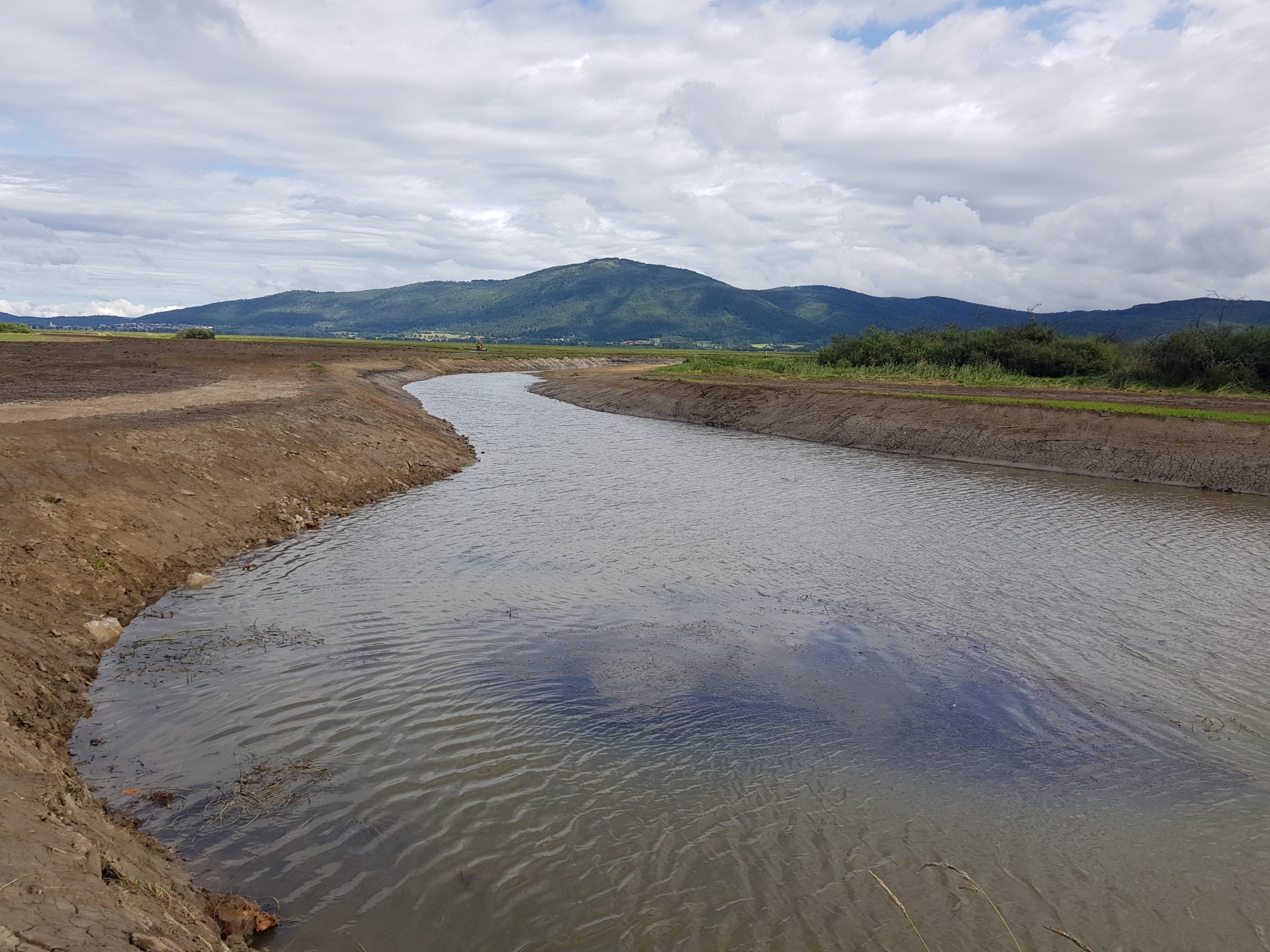 All of our expert predictions turned out to be accurate, despite all the skepticism. Only ten days after the construction machinery finished their work and drove off, the site area began to turn green again. It repels new reeds and other lake plants everywhere. Crowds of fish are already swimming in the new menaders, and crustaceans have made their homes on the banks, which indicates the increased self-purification of water. 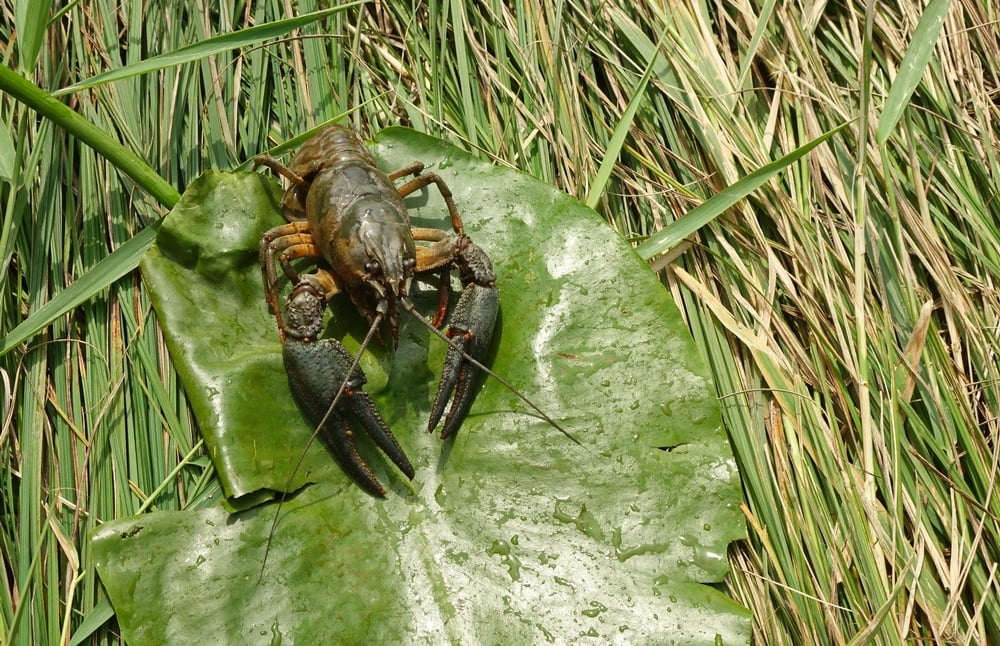 Crayfish  have made their homes on the banks. Photo: NRP 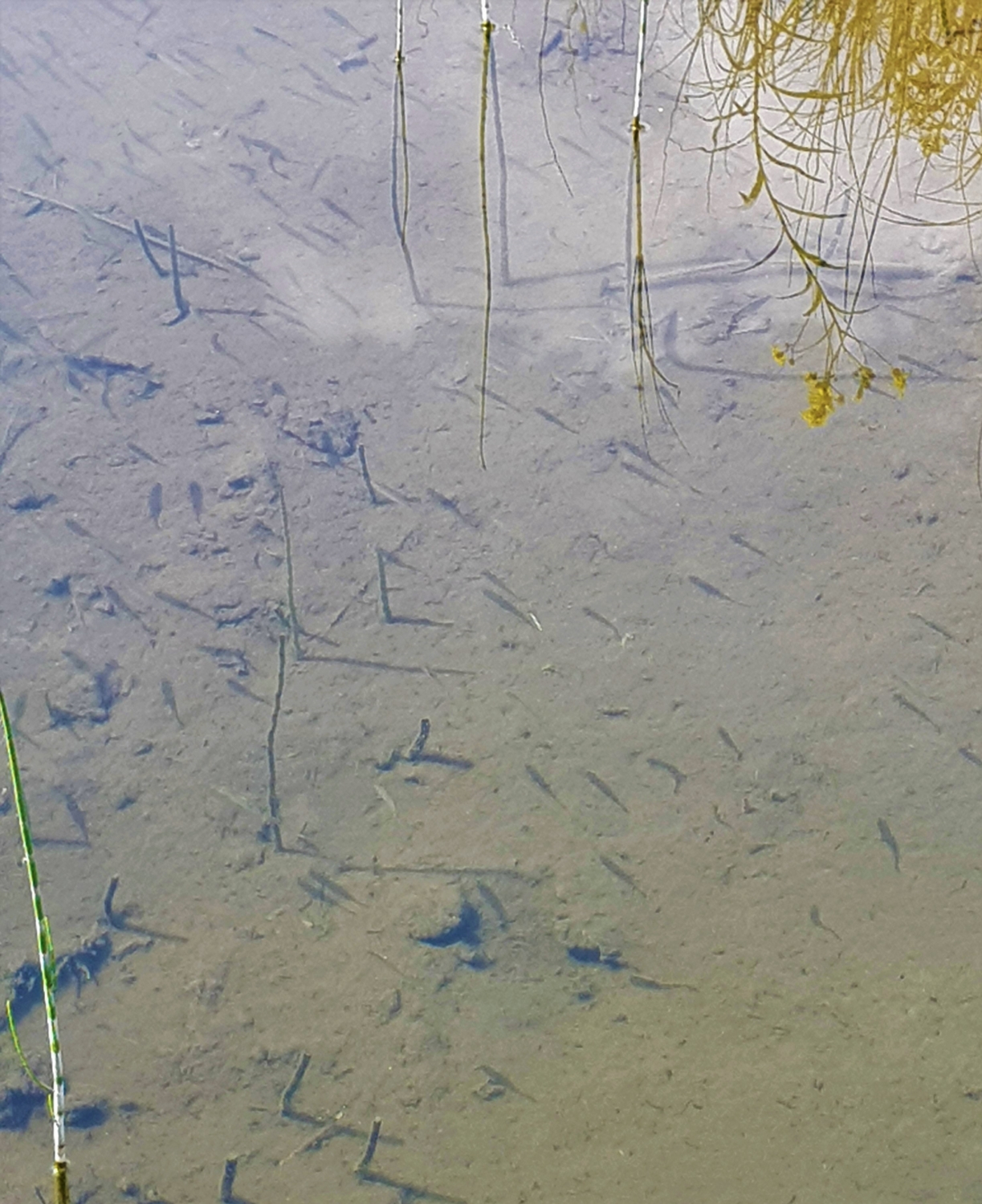 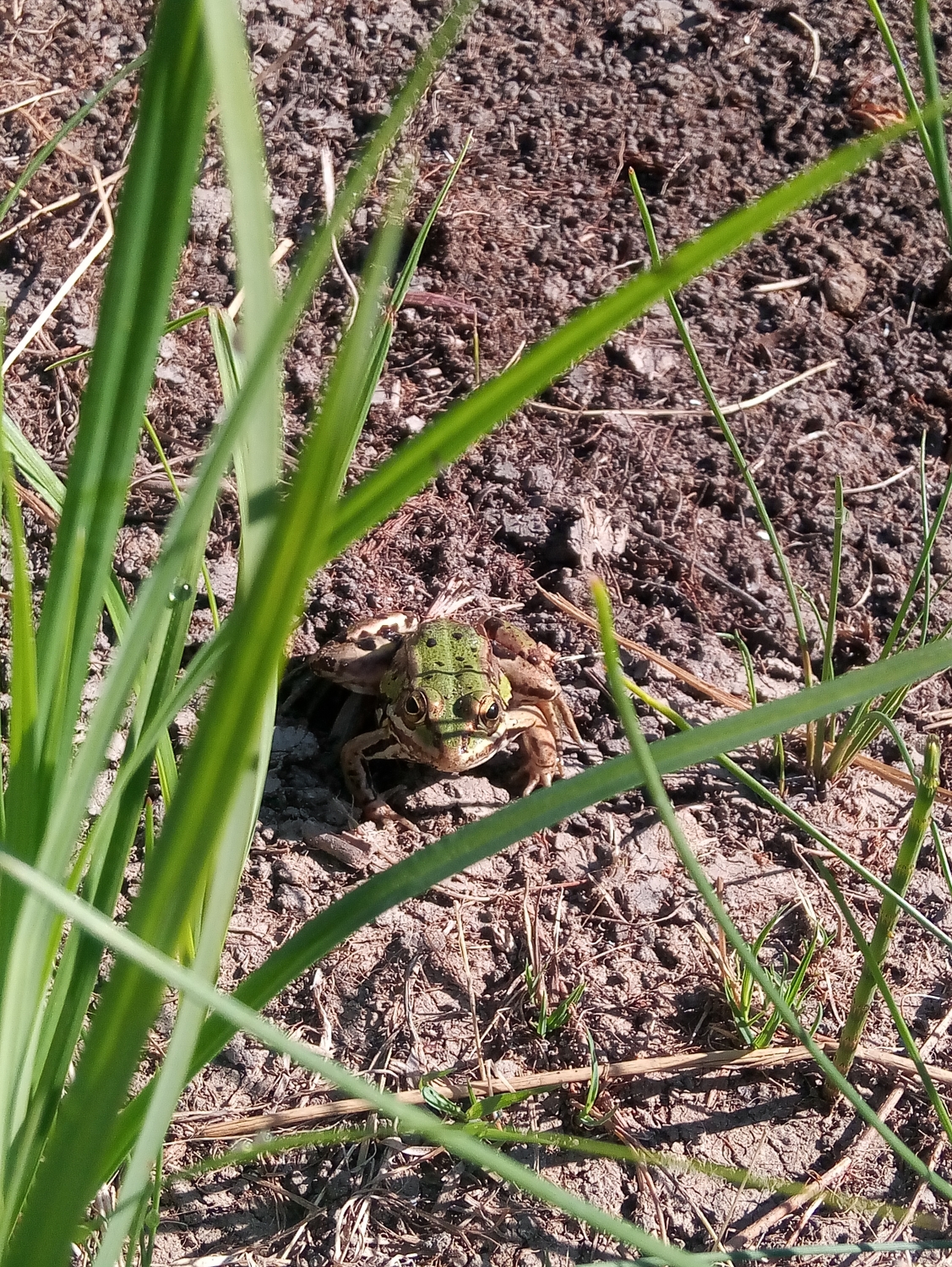 Only ten days after the construction machinery finished their work and drove off, the site area began to turn green again. Photo: Matevž Podjed 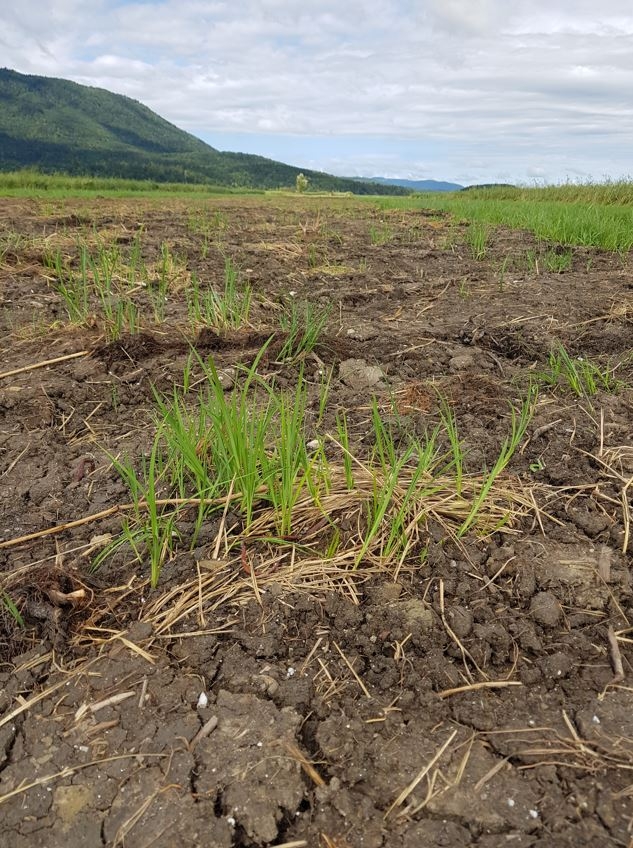 The area full of heavy construction machinery only ten days ago, is now bursting in greenery. Photo: Eva Kobe

Cerknica fishermen have already noticed the positive effects of renaturation. The key goal has been achieved: to slow down the drying out of water during the dry periods of the year. The water flows more slowly along the meanders than it did along the straightened level of the riverbed, so it reaches the sinkholes in the lower part of the lake later in time and thus the water disappears more slowly. This year, therefore, only Rešeto sinkholes dried up in the spring, so the Cerknica fishermen had ti rescue fish only there. Prior to renaturation, they followe this rule: when the Dolenje Jezero measuring station showed a water level of 130 cm, Vodonos was going to dry up in two days. This spring, at a water level of 130 cm, the water in Vodonos did not dry out for 7 days. There was no rescue of fish there neccessary at all, as the lake was soaked by rain on the seventh day. 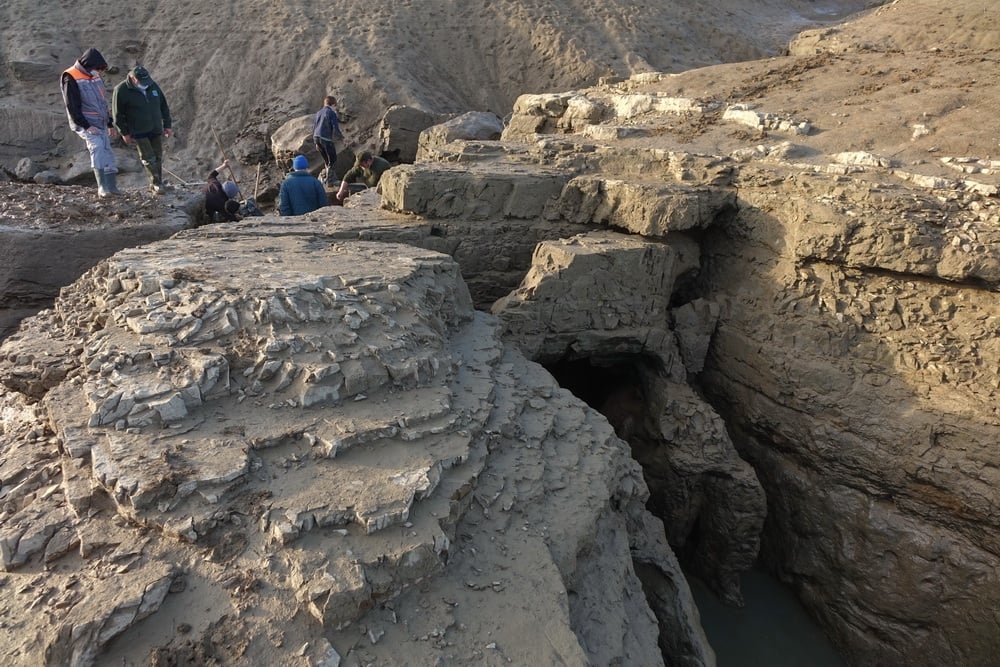 The goal of renaturation was to expand the ecosystem, to give nature more space. There will be more of it in meanders for fish and crayfish and aquatic plants, as Stržen is now longer by 4 chilometres. There will also be more coastal vegetation, typical of Cerknica Lake, a local reed. As a result, there will be more food for birds and other animals, the life cycle will run here again as it once did. The intervention also has a positive effect on many locals. The leveling of the riverbed a hundred years ago cut the land for many and made it very difficult for them to access it. By returning the riverbed to its original form, these owners have again been given easy access, as the boundaries of the land are again in line with the cadastre. 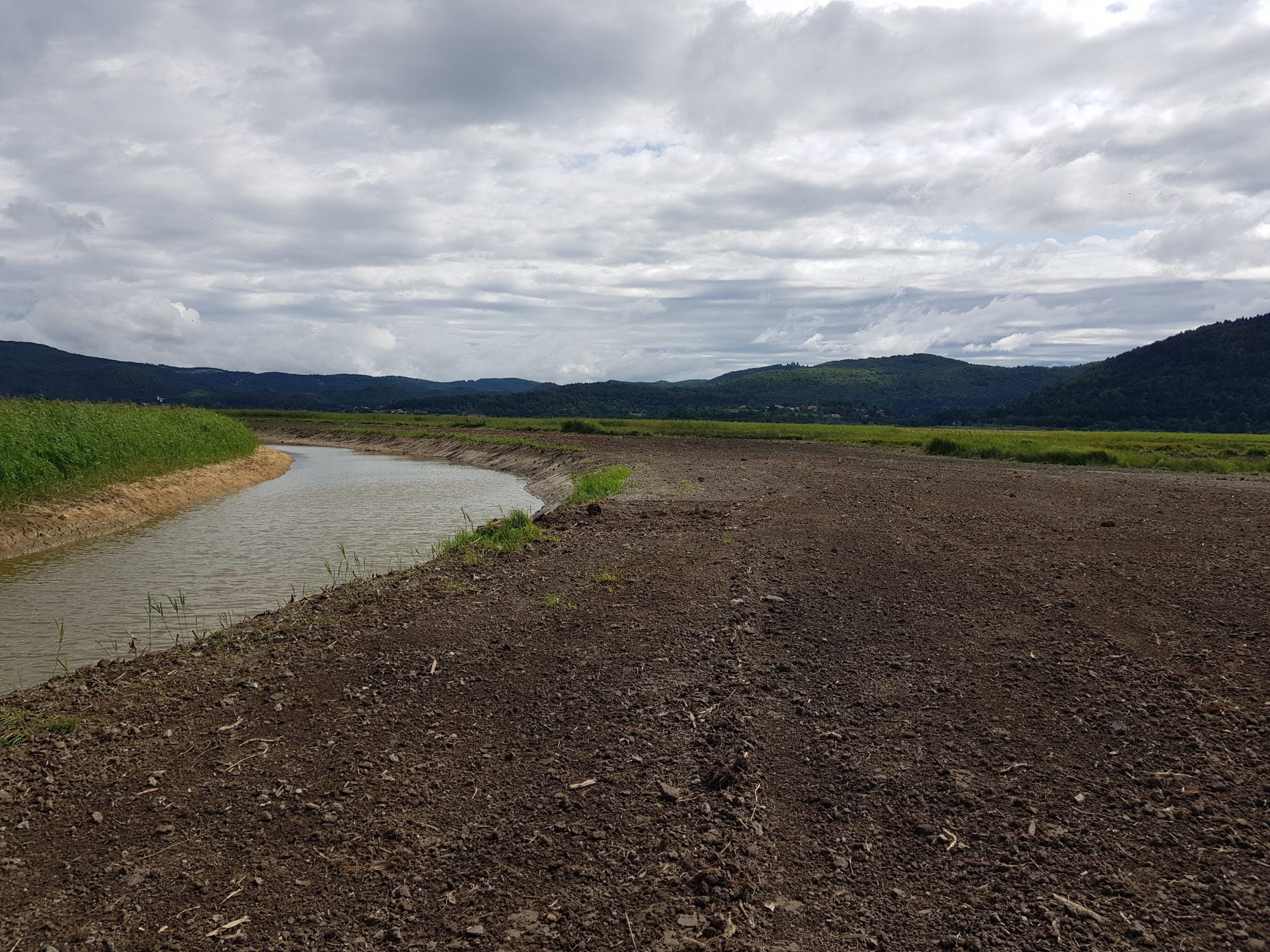 The regulations have been done on private land and have cut many plots of land in half, which prevents some owners access to their own land. Redirecting the watercourse have solved this problem. The entire area has been restored and past access points have been be re-established. This way, all the landowners are now able to access their property and manage it as a whole. Photo: Eva Kobe

Negative consequences of past interventions

The artificial drying of the lake has left other negative consequences:

This is how we started digging-up the original meanders back in 2019. Photo: Irena Likar

An act of bravery and historical importance

Notranjska Regional Park carried out a pilot restoration of the upper parts of watercourses Goriški Brežiček and Tresenec in 2009. These two watercourses were redirected into their natural meanders with a total length of 1,2 km.

Since then, Notranjska Regional Park has been actively seeking possibilities of financial support to continue the renaturation of the regulated watercourses on Cerknica Lake. We succeeded in 2016, when the LIFE financial mechanism accepted 42 projects out of 260 that were submitted. One of them is project LIFE STRŽEN.

In addition to the LIFE project, which will regulate the watercourse Stržen in the area of Ključi, Notranjska Regional Park also acquired a national grant for the implementation of project KRAS.RE.VITA in 2017. In the scope of this project, the Park will restore the upper part of the Stržen watercourse, known to the locals as Beli breg. 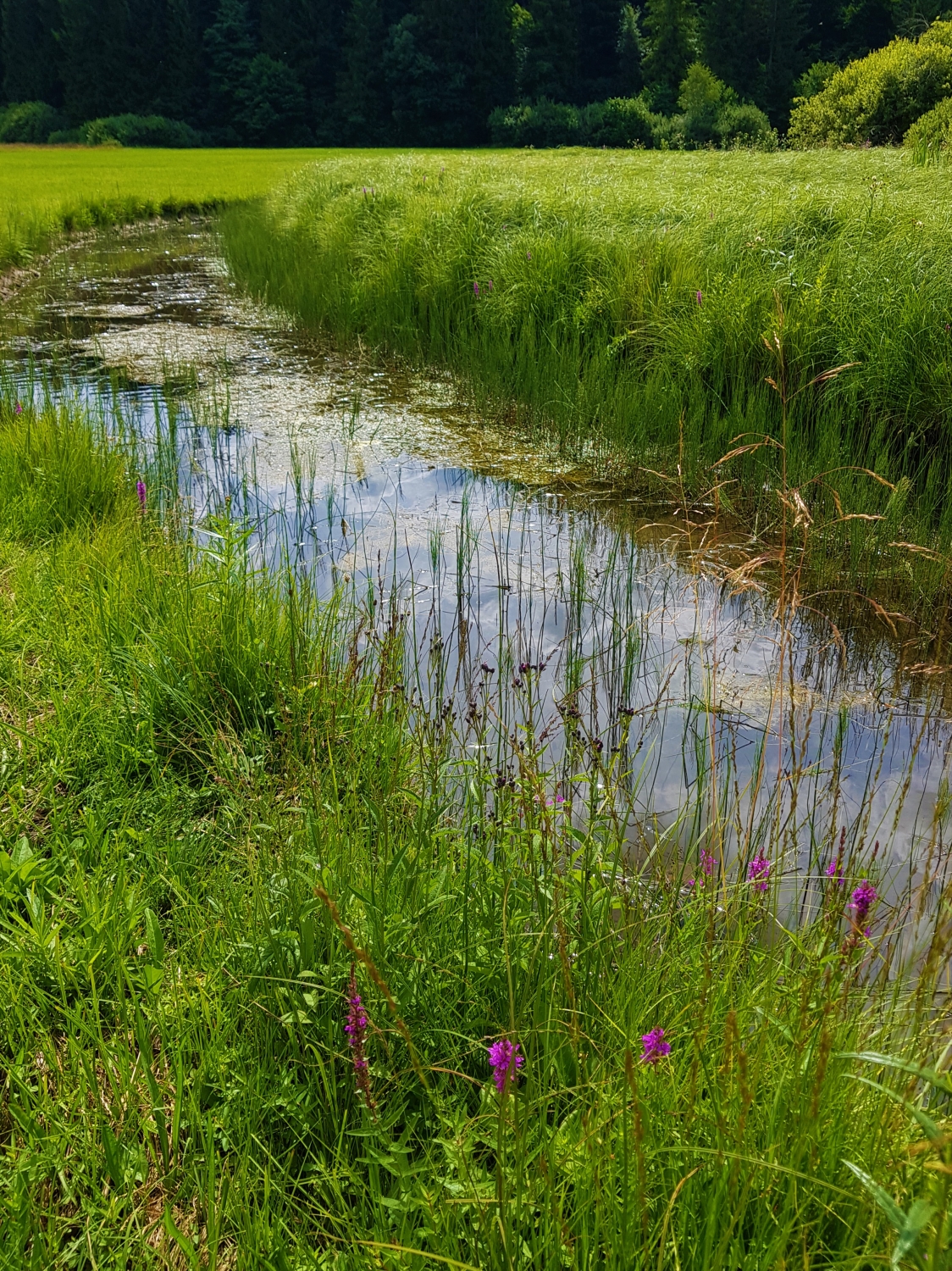 Head of LIFE Stržen project Irena Lika said, after the renaturation work have been completed: »The renaturations were brave and historic action. The execution of works was highly dependent on the weather and consequently the water level of the lake. The interventions were performed in an extremely sensitive environment and for the first time in the world on an intermittent lake. The implementation of the intervention has aroused the interest of many experts and nature protection institutions from different parts of Europe, which are also facing the negative consequences of leveling rivers and watercourses in the past. They were interested in how we carried out the work and how our experience could be used elsewhere.« 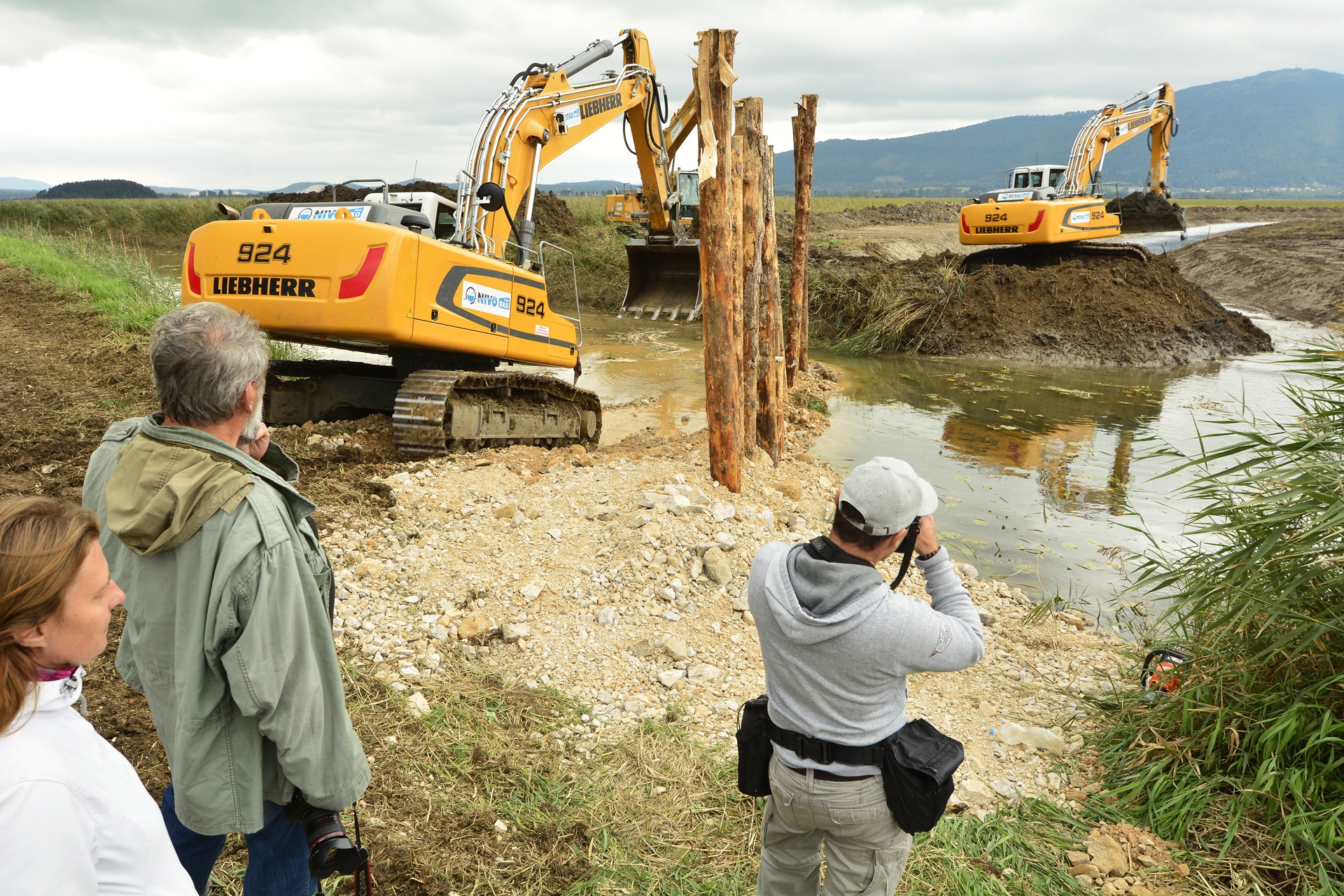 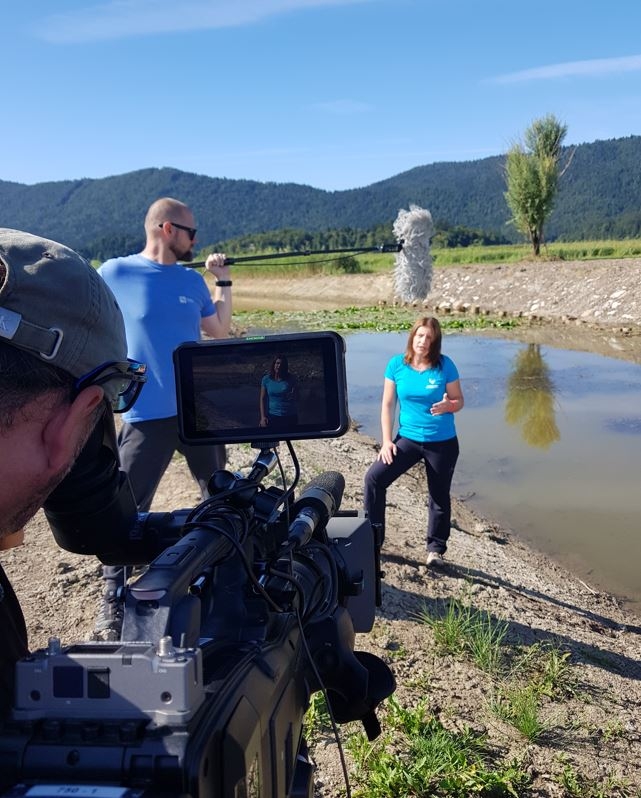 Numerous media are being also interested in our renaturation project, recording and writing weekly articles about our restoration of Stržen’s original meanders. In the photo: Irena Likar in front of the cameras of the documentary program of RTV Slovenia. Photo: Eva Kobe 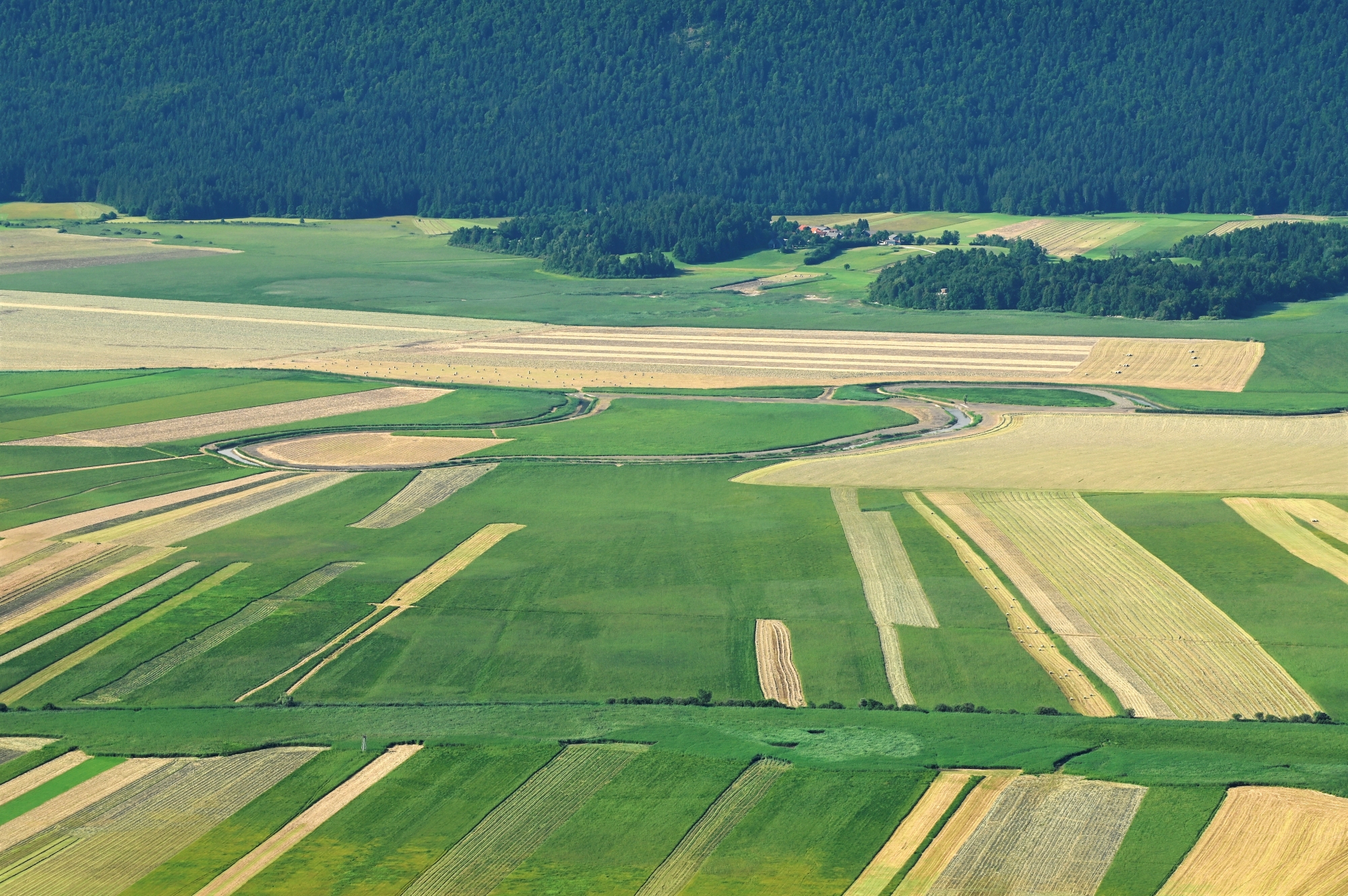