The LIFE Stržen team will help save Slivnica hill amphibians

The entire content of LIFE Stržen project is commited to expand and improve habitats for plants and animals inside the Notranjska Regional Park. The LIFE Stržen team is putting it into effect by building new infrastructure to redirect visitors from areas, crucial for animals and plants of the park. The Stržen watercourse renaturation will expand ecosystem of this area by restoring Stržen`s meanders. Thanks to the park`s organization of weekly themed weekends and local guides` training classes, nature protection and conservation awareness of park visitors and of the general public is raising.

This weekend, the employees of the LIFE Stržen project will physically, with their own hands, help preserve amphibians from the Slivnica hill area. This Saturday and Sunday evening (March 27 and March 28, 2021) we will join the locals in the rescue operation of amphibians, which migrate en masse from Slivnica to Lake Cerknica each early spring, to mate and create new lives on spawning grounds. Unfortunately, toads, frogs, newts and other amphibians encounter the “black spot”: a 3-chilometre section of the Cerknica-Grahovo regional road each spring becomes the grave of many amphibian “grooms and brides”. 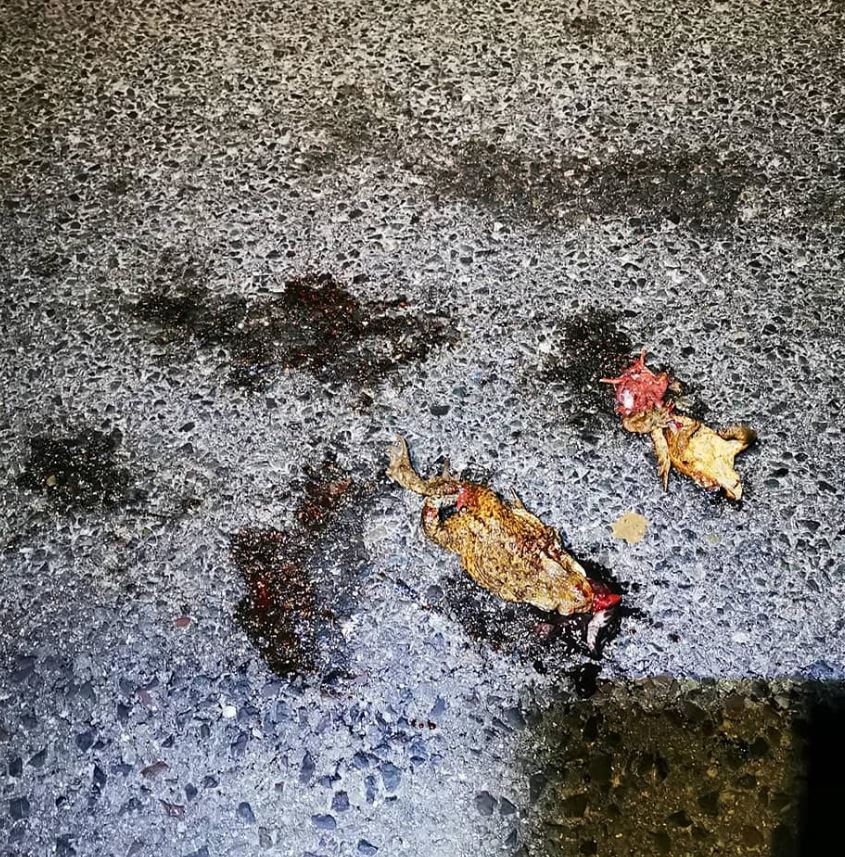 This tragical events could actually lead to extinction of Slivnica`s amphibians in a few years, so an effective solution is needed. The best one would be a multi-million euro worth reconstruction of Cerknica – Bločice regional road by building amphibian passages (tunnels). A plan, which will definitely be put infto effect some time in the future. But action should be taken immidiately.  Until the National Directorate for Infrastructure, a mandatory partner in the intervention as such, doesn`t plan it in its national strategy, the only solution for the little creatures remains manual volunteer transport of them across the dangerous road. Of course, only a small part of amphibians can be saved in this way, but every toad that makes it alive across the deadly road below Slivnica matters.

Volunteers who would like to help us are warmly invited! More hands mean more rescued amphibians. We will meet a  6 p.m on both days (Saturday and Sunday) at the Discount of Perutnina Pivka in Marof, Ulica 4. maja 1a, SI-1380 Cerknica. Everyone will be given detailed instructions on the site. Bring a reflective vest, headlamps, waterproof shoes (boots) and clothes, and an extra set of clothes to change into (it will most likely rain during the activity). As well as clean buckets or containers. Gloves will be available there. All participants must also have a completed STATEMENT on participating in the campaign at their own risk. The statement is available at the link below.

Let us not forget that the COVID-19 epidemic restrictions are still valid, so take the measures in force. Collection is still limited to a maximum of 10 people, so arrange along the road section 10 by 10. Also, wear protective face masks. Do not join the action if you feel unwell or have any of the already known symptoms of COVID-19 (headache, sore throat, fever, loss of smell and taste, joint and muscle pain, feeling of severe fatigue). It is also necessary to take into account all applicable restrictions related to socializing and crossing municipal borders and regions, as well as the curfew, which starts at 10 pm.

The police have been informed about the event, and drivers who will be driving on this road between 6 pm and 11 pm are asked to be extra careful and pay attention to the volunteers on the Cerknica – Bločice section. Drivers, please reduce your speed, regardless of the prescribed limit.

The name amphibian means “double life”, and is given to members of this group for the double life that they lead. From a fertilized egg, they develop into an adult animal inside water through the gill-breathing larval stage. It no longer breathes through its gills, but through the lungs, so adult amphibians can live on land. Due to the very thin skin, which does not protect them from drying out, adult amphibians are tied to moist living spaces. Amphibians are animals to which we owe the existence of terrestrial creatures at all. They represent an evolutionary transition from water to land.

In the Notranjska Park area​​, researchers have discovered as many as 15 of the 19 existent indigenous species living in Slovenia, despite the hilly terrain and lower temperatures of this part of the country. The shallow intermittent Lake Cerknica is a real amphibian paradise. Some, like all three species of green frogs, stay there all year round. In the spring they mate, in the summer they sunbathe on the banks of sinkholes or cool down inside of them, and in the winter they burrow into the ground waiting for spring to wake them up again. 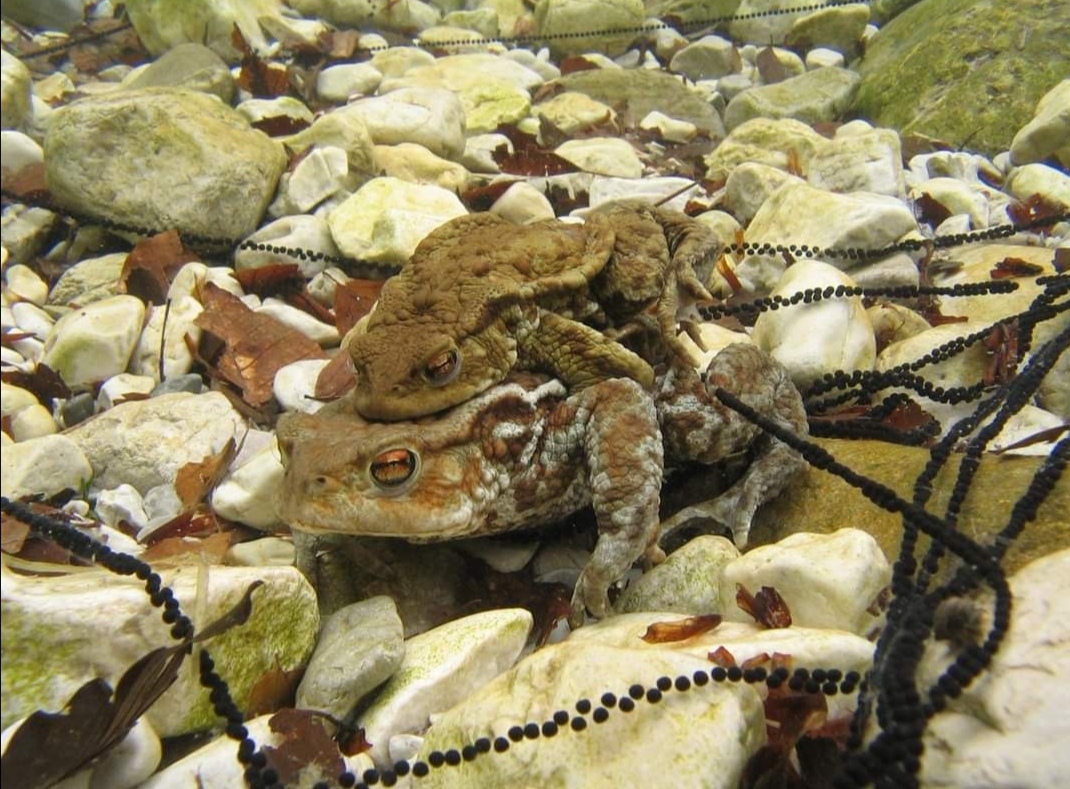 Reproduction of frogs on Lake Cerknica. Photo by Kristof Istinič

Others, such as the common frog, agile frog and common toad, only spawn in the shallows of the lake in the spring, and then the adults return to live on land, in the woods. Even the Italian crested newt, yellow-bellied toad and European tree frog visit water bodies only during spawning, but they don`t tolerate any fish company, as their eggs layed by females on parts of plants, represent a delicious meal for them. 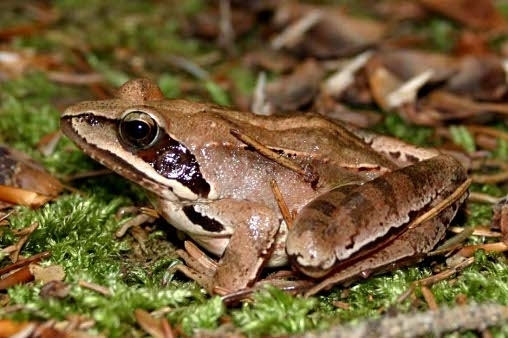 Proteus, which never leaves its cave shelter, is an even greater specialty, as it is characterized by neoteny, a particular form of development where the animal`s sexual development is accelerated, yet its body form remains exactly the same as the larva. The larvae of fire salamander, another amphibian species from the Notranjska Park, develop and grow in mother’s body for quite some time. When the female lays them in the pool of a small stream in the spring, they still breathe with their gills, and then slowly transform into adult swamps that breathe with their lungs and live on land. Alpine salamander has ‘gone even further’ as the larvae in the mother are completely transformed and the female corners live cubs that are already breathing with their lungs. This adaptation it to survive higher above the sea than any other amphibian in our country.

On rainy spring nights, as soon as the temperature rises a few degrees above zero, many amphibians, such as toads, brown frogs, and newts, start migrating from their winter habitats to water, to start spawning. But in Notranjska Park, they encounter a problem – the busy regional road they have to cross to reach the lake, a road a man has built and harshly crossed their millenial migratory route. 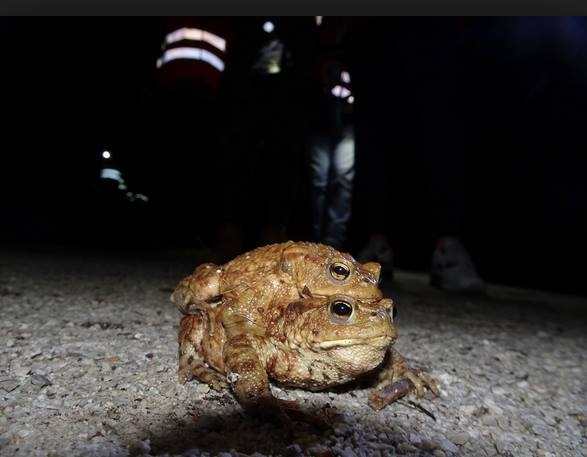 If only they made it safely do the lake. Photo: Helena Bavec

The already noticeable decrease in the population of amphibians in Notranjska Park due to road deaths can have a fatal impact on ecosystems, as amphibians are a key part of them. Why? Tadpoles are a source of food for many aquatic organisms, and at the same time, by scraping algae from the base, they prevent them from multiplying too much. If they do, their death leads to a lack of oxygen in the water and consequently the death of aquatic animals. Adult amphibians, however, are important predators that eat animals smaller than themselves. At the same time, they themselves are an important source of food for birds, fish and mammals. Frogs and toads are therefore key to maintaining the natural balance and proper functioning of the ecosystem of which man is a part.

So, the amphibian migrations are a big problem. With traffic increasing, the local amphibian populations might even get  extinct. Notranjska Park is very well aware of it, as our main task is species conservation. The permanent solution which will also be a most effective one would be the road reconstruction with amphibian crossings. The reconstruction project of Cerknica – Bločice regional road means a huge financial burden, which could only be overtaken by the national Directorate for Infrastructure, but which is already working on a similar project and cannot currently go into another one. The Notranjska Regional Park will therefore dedicate its next nature conservation project to Slivnica toads and thus secure European Union fonded financial resources for the construction of safe passages for them. Until then, each year the park will participate in manual transport of the little amphibian creatures to the safe side of the busiest road in Cerknica.

Even before the development of science, people attributed natural phenomena, which they marveled at but could not rationally explain, to magical or mythological creatures. Today, however, with scientific explanations based on facts, we lack a hint of mystery or magic. There is a lack of child’s imagination with which we should see Slivnica toads as good witches who protect, with their spells, the nature and the inhabitants from the foot of the mountain. Believing in this, we might put more effort into them. 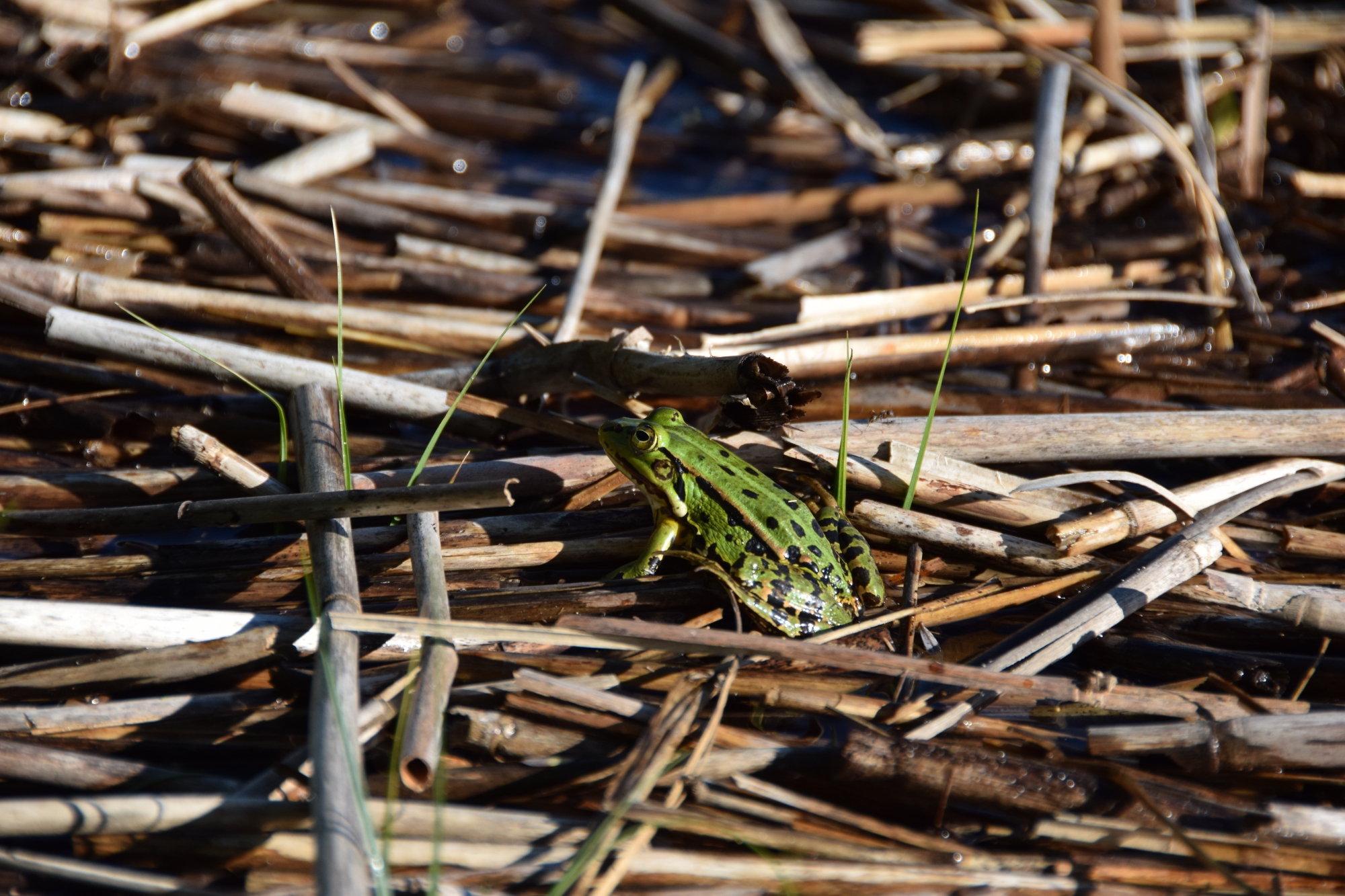 European tree frog (Hyla arborea) is the one and only species in Slovenia out of a total of 218 species of the genus Reg (Hyla) that live on Earth. Photo: Jošt Stergaršek