The third issue of the newsletter Iz tršce is out 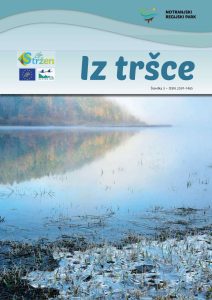 The third issue of the project LIFE Stržen Information Bulletin Iz tršce has been published.

The focus of this issue is fishing on Lake Cerknica. In the last few decades, fishing has drastically changed to the point where it almost changed its essence. Since prehistoric times, the goal of fishing was to search for food. In modern times, however, there are a lot of fishermen on Lake Cerknica, who are more interested in spending a day away from the craziness of the world and in capturing a great photo of a fish, that later swims back to the safety of its fish kingdom. Viktor Ponikvar, our interviewee for this issue, most definitely isn’t one of the modern-day fishermen – he still takes his trophies home with him. We also write about bigger sins than some extra fish in a basket, namely the unacceptable littering around Lake Cerknica. In this issue, we also answer some of the questions that were posed by the participants of the Notranjska Regional Park evening.

We wish you a pleasant read!