What fun we had on Bobnarica Ornithological Youth Camp

School year ends at the end of June and summer holidays begin. Young ornithologists are especially looking forward to these, as every year the Youth Ornithological Research Camp begins, which has been organized by the DOPPS since 1994. This year, as part of the LIFE Stržen project, they connected with us, Notranjska Park, and explored Lake Cerknica. and its surroundings. On 27 June, 24 young ornithologists and 7 mentors camped in Zelše. They had a good week of field research, socializing and fun ahead of them. This year’s camp, already the 32nd in a row, did not differ organizationally from the previous ones; they got up very early and prepared their breakfast very sleepy, making sure we hit our mouths with a spoon. After the morning field, we returned to Zelše for lunch, where the kind Mr. Gruden delivered it to us from the Pri Glaž’ku inn. After lunch, we mostly hid in the shade until the evening, as it was well over 30 degrees Celsius outside. After dinner, we made our way back to the field and then wrapped up in our sleeping bags again late at night until morning.

There were 6 groups at the camp, led by experienced mentors. Each group devoted themselves to researching a specific topic, but during the camp, all participants were able to test themselves in just about everyone. Thus, young people practiced field work and data collection, as well as their recording, processing and exchange of information between peers. In addition to group work, the events at the camp were enriched with joint activities; they paddled part of the Unica River with canoes, swam in Lake Cerknica, learned about netting bats and ringing corncrakes, and measured themselves every day in recognizing birds or in “mysterious photography”.

Mornings were dedicated red-backed shrike censuses. In total, all groups recorded 97 pairs on eight different plots. Four plots have been surveyed in previous years and in general there were the most shrews in 2007, but this year more than in 2018. A good half of shrews were found on bushes and trees and the vast majority were surrounded by grasslands. Shrews were most commonly observed on yarns up to 4m high and up to only a few decimeters wide.

In the group for scarlet fever, they explored this mysterious and rare species from the finch family. It is a nesting bird of moist overgrown meadows, which in Slovenia regularly nests only in the area of Cerkniško polje. In collaboration with other groups at the camp, they surveyed six plots. They recorded 18 specimens of scarlet males, among them purple-red-colored males, which they took a good look at. For each individual, they recorded the sex, age, height of the place where he was sitting, and the composition of the habitat in the form, and drew it on a map.

In the group of forest birds, four enthusiastic young ornithologists and not a much older mentor collected data from transect censuses of forest birds. These were carried out in the same way as the spring forest bird censuses and the SIPKK censuses – on a 2 km long transect (= section) and by recording birds in the inner (<50 m) and outer (> 50 m) belt. The groups went to the forests of different associations and at different altitudes, and the mentors entered their results into Excel, easily processed them and compared them with some of the results of the spring censuses. The participants were especially impressed by the Strmec primeval forest with huge “droughts” and the local family of white-backed woodpeckers, which testified to the first confirmed nesting in this primeval forest remnant.

In the biodiversity group, they compared different habitat types according to the number of bird species recorded in each of them during the camp. Our field work took place in the same way as for the other groups, one day each was dedicated to the census of scarlet, brown shrike, forest and aquatic species. They also went to night terrains in the vicinity of Lake Cerknica and Javorniki. They used data collected by all groups during the camp for interpretation. Most species (49) were observed in the mosaic cultural landscape, followed by water surfaces with 36 species, and the least species were observed in the forest (31).

The birds of the cultural landscape were recorded by the groups on various meadows in the vicinity of Lake Cerknica. A total of 5 transect censuses were conducted, in which 49 species of birds were recorded, of which 20 were also nesting there. As many as 422 couples were listed! They also explored hidden corners near Lake Cerknica, of which they were especially impressed by the Kotel waterfall, where they could not resist soaking their feet in cold water.

At the camp, each group also spotted some interesting and rare bird species, and there was no shortage of sightings of other rare animals or plants. Observations of the dwarf woodpecker, white-backed and three-toed woodpecker, short-toed lark, dragonfly, Cossack, black-headed shrike, pink starlings and griffon vultures attracted the most interest. Altogether, 139 species of birds were spotted! Quite a few groups also met a bear, badger, wild boar or fox.

“This year’s camp ended on Sunday, July 4, when young ornithologists presented their findings in Zelše to their parents and relatives. The camp ended without complications and judging by the responses we had a very nice time. Thanks to the responsible, fun and knowledgeable mentors, without whom the camp would not dare to organize. Colleagues from the Notranjska Regional Park helped me a lot in the organization, and the Glaž’k inn took care of the food above standard. Thanks are also due to the members of the Slovenian Society for the Study and Protection of Bats, who brought us closer to the bats, and to all colleagues from the association’s office who helped me in one way or another with the implementation of the camp. See you in June 2022! ”wrote the camp leader Tilen Basle at its closure. 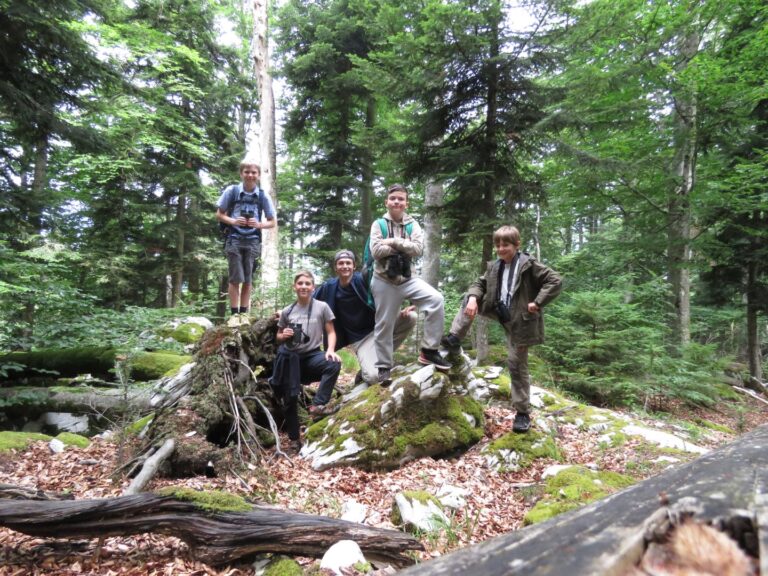 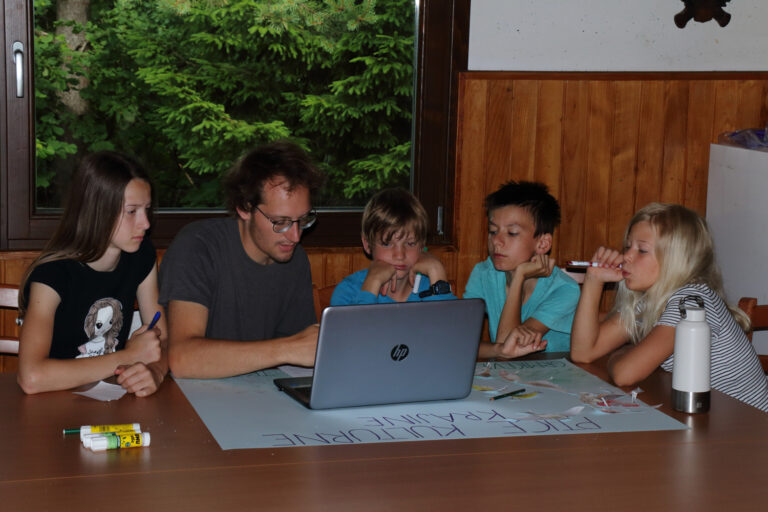 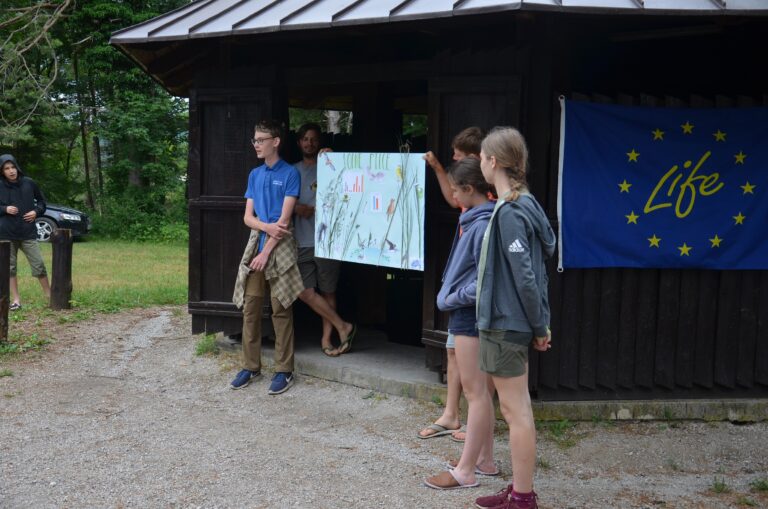 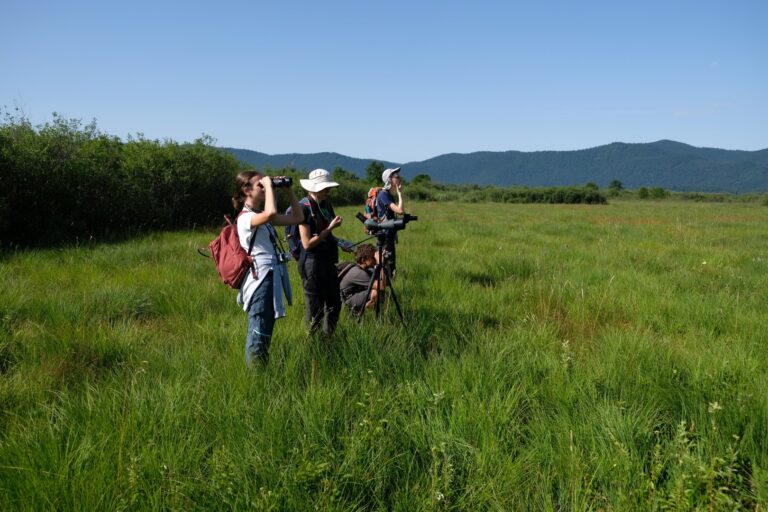 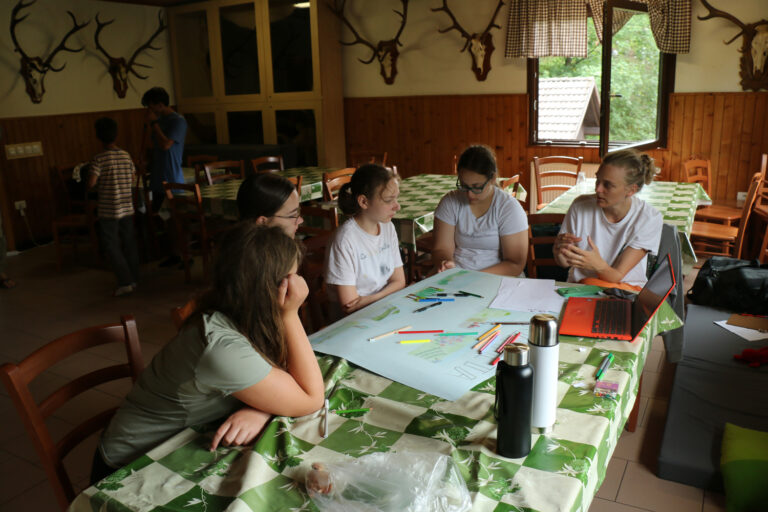 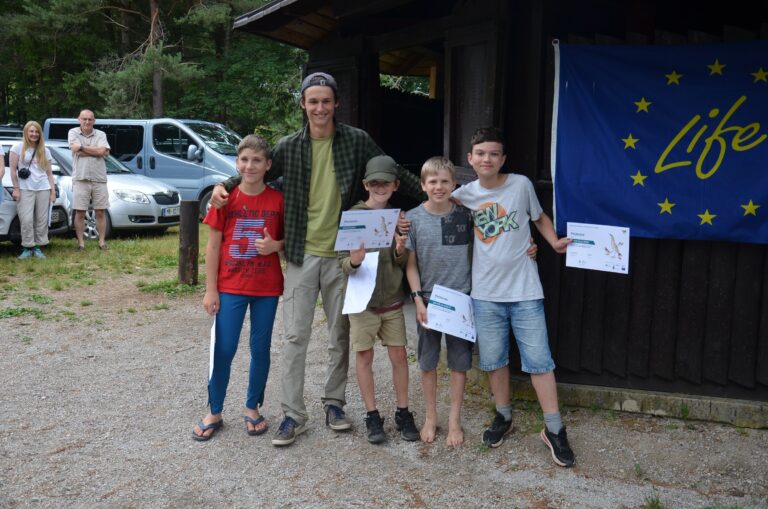 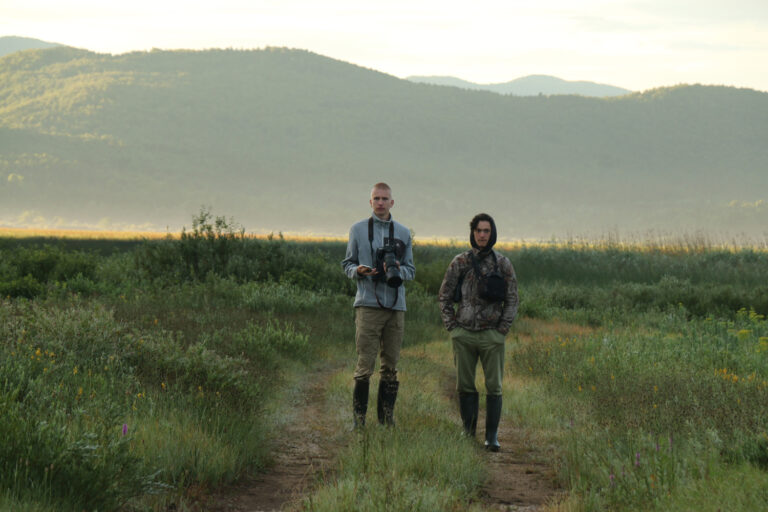 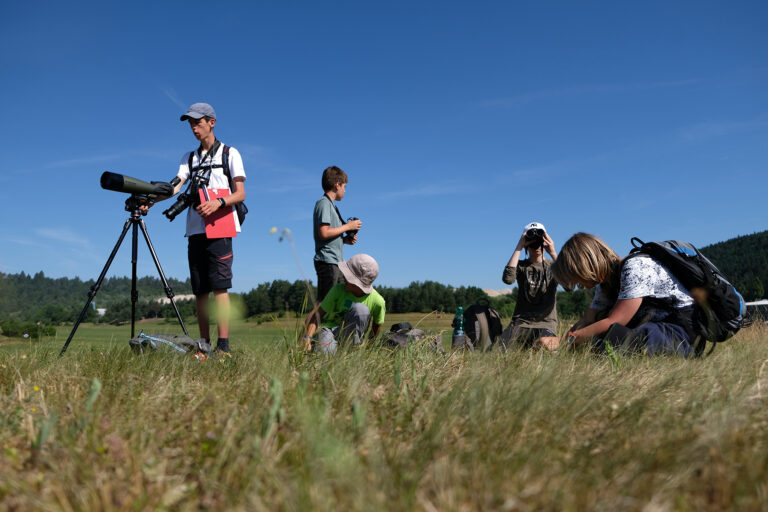 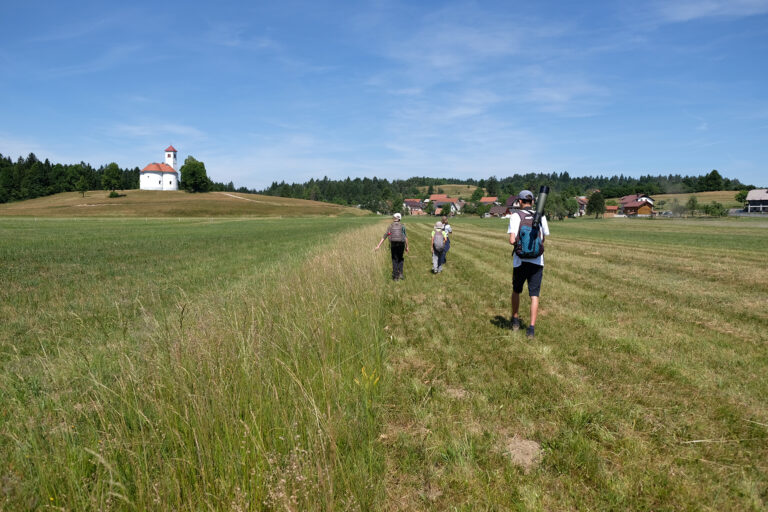 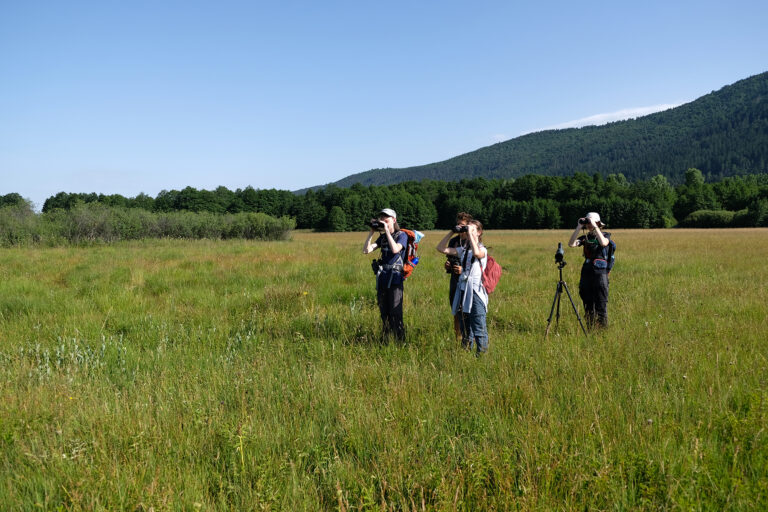 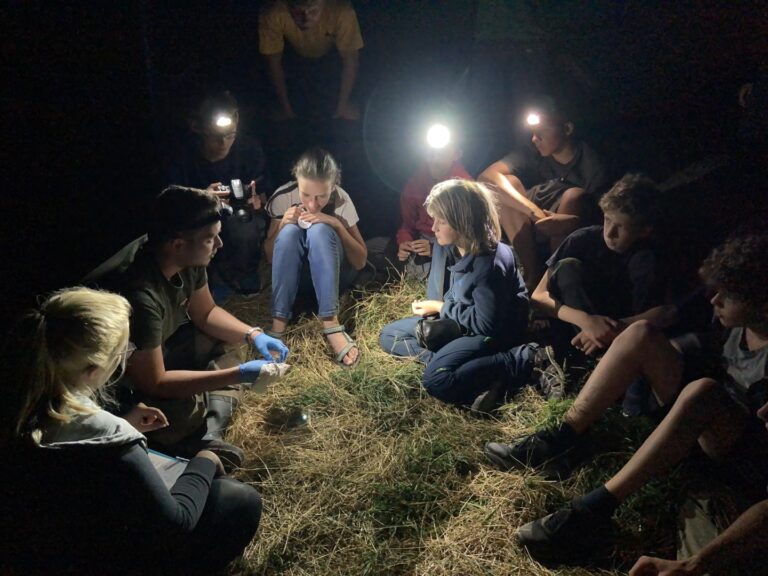 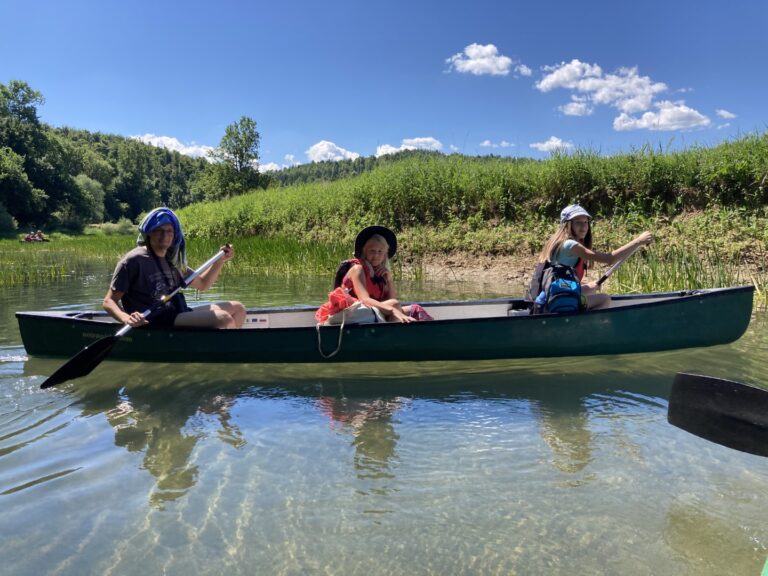